The Story of Afrim

Afrim Vllasa, he is 12 years old and lives in Kosovo, Albania, a very poor, war-ravaged country trying to achieve the benefits of a free democracy. This is his story.

In the Spring of 2013, we received a request from Gift of Life International. They had a list of six children in remote countries that needed critical heart surgery in the near future. They asked us if our Foundation would be able to help with the finances to bring the first child, Afrim Vllasa, to the U.S. for corrective surgery to repair a hole in his heart. Our board reviewed the case and together with a joint donor agreed to sponsor the trip and surgery. On August 27th, Afrim and his father arrived in North Jersey where his corrective surgery was scheduled at St. Joseph's Hospital in Paterson.

Afrim was operated on the first week of September using an innovative new procedure that enabled doctors to successfuly complete the operation using catheters threaded into the heart through the femoral artery. Within days, Afrim showed remarkable recovery and improvement. He was released from the hospital five days after the surgery and brought down to District 7500 where one of our trustees, May Montag-McMurray, hosted both Afrim and his father Dani in her home during his recovery.

Like many active 12-year olds, Afrim felt good and wanted to do those things 12-years are wont to do. However, he was watched carefully to be sure he didn't do anything that would cause him harm. While here, Afrim discovered a new favorite meal . . . steak! From that point on, Afrim ordered steak for every meal.

On September 16th the Board of Trustees were surprised and greatly pleased to have Afrim and his Father Dani join us at our monthly trustees meeting. While they didn't speak English and we didn't speak Albanian, there was absolutely no problem with communicating. What a delightful evening. 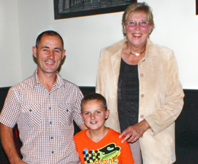 Dani, Afrim and May Montag-McMurray

Shortly after this wonderful time together, Afrim was anxious to return to his home to see his mother and two brothers. At his two week follow-up examination, doctors approved his travel and he has now returned home.

We don't often have the chance to see the end result of all the work we do to help under-prividedged children around the world receive the life-saving surgeries and care they need. But in this case, we did and Afrim will remain a strong incentive in our memories for the great amount of work still to be done to save the world's children. 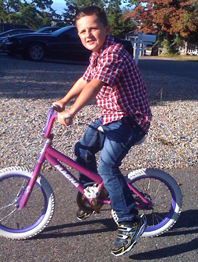